Inspiring story: Goffin vs. Dimitrov at the Masters 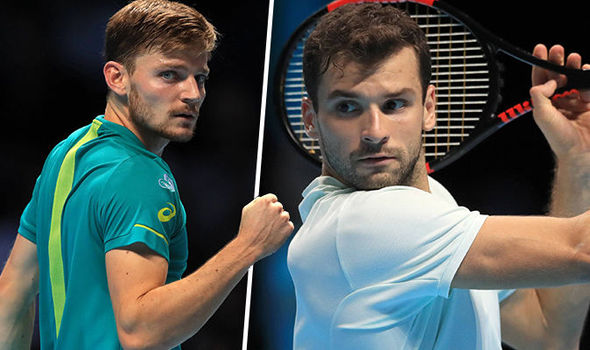 Sport masters as a source of inspiration.

Last week-end a Belgian tennis player, David Goffin, was for the first time in the final of a prestigious tournament : The 2017 Nitto ATP Finals aka “The Masters” in London. As such it is already a major event for a small country like Belgium.

Not only David Goffin has reached the final round of this exclusive masters tournament, but in order to access it, he had to defeat the N°1 and the N°2 players in the world during the same week (Rafael Nadal and Roger Federer). This is exceptional and very inspiring for the tennis players around but this was not enough.

Let’s have a look at the final game.

First, David Goffin was almost ridiculed by Dimitrov in their first game during the same week. Dimitrov won 2 sets to 0 with a hard score in each set (6-0 then 6-2).  Due to the nature of this tournament it was made possible for Dimitrov and Goffin to meet again, in the final. However all statistics and predictions were in favour of a Dimitrov victory, the audience has witnessed a tensed and thrilling moment provided by those two great Masters.

How the match was won

Dimitrov had thrashed Goffin for the loss of just two games only four days earlier in the group stage, but the Belgian proved a far tougher opponent in the final.

Goffin beat top seeds Nadal and Federer on the way through, and he made the early running as the underdog once again.

Dimitrov had to recover breaks of serve twice in the opening eight games but moved ahead when he converted a fifth set point in game 12.

After five breaks of serve in the first set, the second was a much tighter affair, with Dimitrov missing out on a potentially decisive break in game six after a Hawkeye challenge.

Goffin grabbed his chance in the next game with a forehand winner and confidently served out the set to force a decider.

The final set was a thrilling contest in itself, with Dimitrov fending off four break points in the first game before moving 4-2 up when Goffin sent a backhand long.

With two hours on the clock, and the large Bulgarian contingent chanting “Grigor, Grigor”, their man edged to the brink of victory, only for Goffin to serve his way back from 0-40 and three match points down.

The Belgian was given a huge ovation by the 18,000 spectators inside the O2 Arena, and he fended off a fourth match point, before Dimitrov finally sealed it when Goffin dumped a seemingly unmissable drop volley into the net.

So what Inspiration tip can we learn from this game of masters?

David Goffin staid calm and focused. He even saved four match points prior to let the win go to Dimitrov.  The most inspiring moments during this game, were the ones when David Goffin started to serve heavily on Dimitrov and when he accelerated on the ball however he was endangered or in difficulty. Hence David’s ability to save match points…

Simply said, the inspiring lesson from these exceptional sports masters : “It ain’t over till it’s over.”

You can watch a summary of this excellent game here: